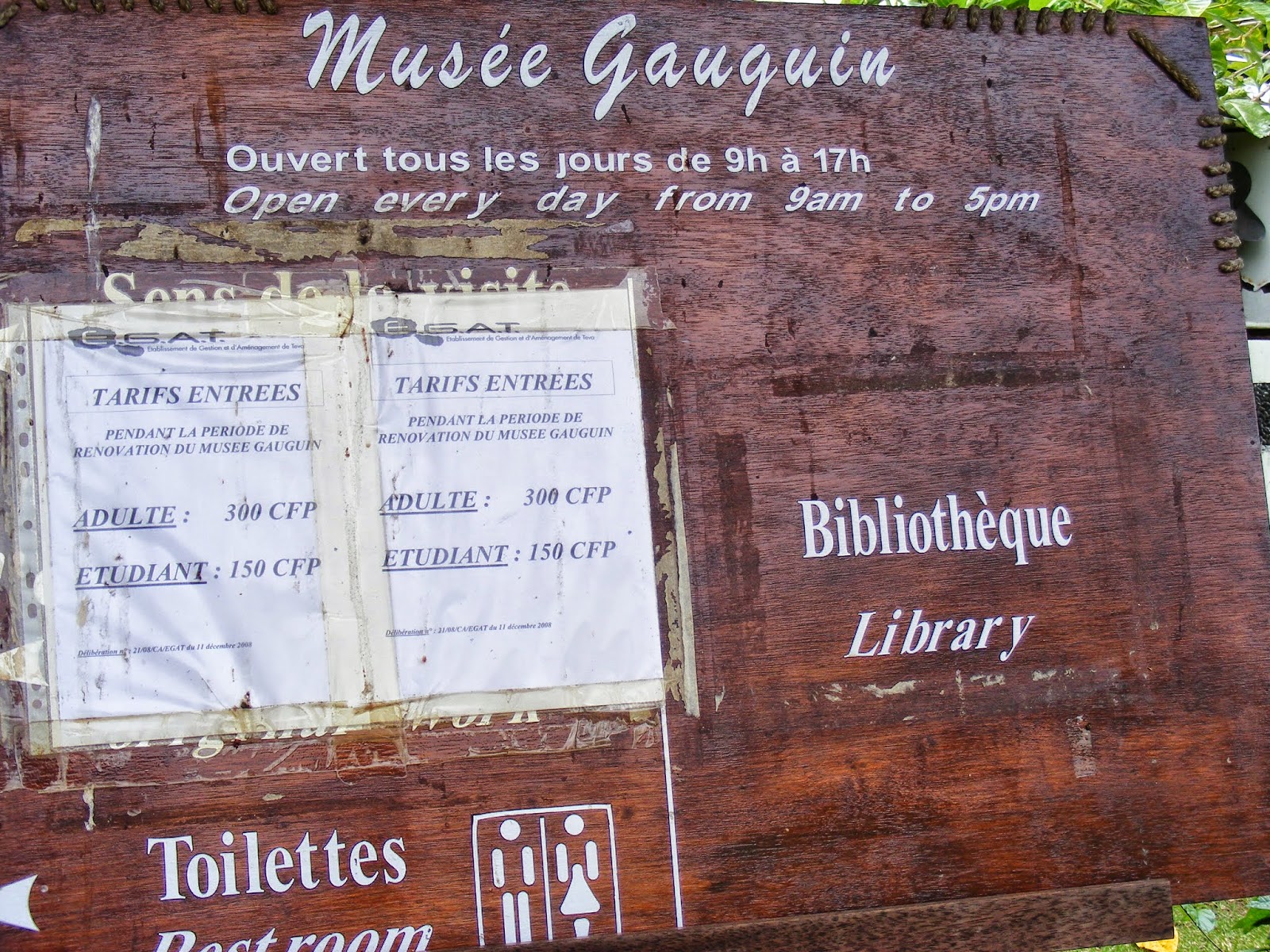 This was the most interesting ‘highlight’ on our half day tour around the island of Tahiti Nui and this was something I really wanted to see when visiting Tahiti as to me Gauguin paintings ARE Tahiti. His paintings are bright, naive and were my idea of a South Pacific island. Prior to going on our trip I caught a TV programme that was all about Gauguin and more specifically about his time in Tahiti so I had great hopes for this museum. I imagined something a bit like the Robert Louis Stevenson museum in Samoa but how wrong can you be? 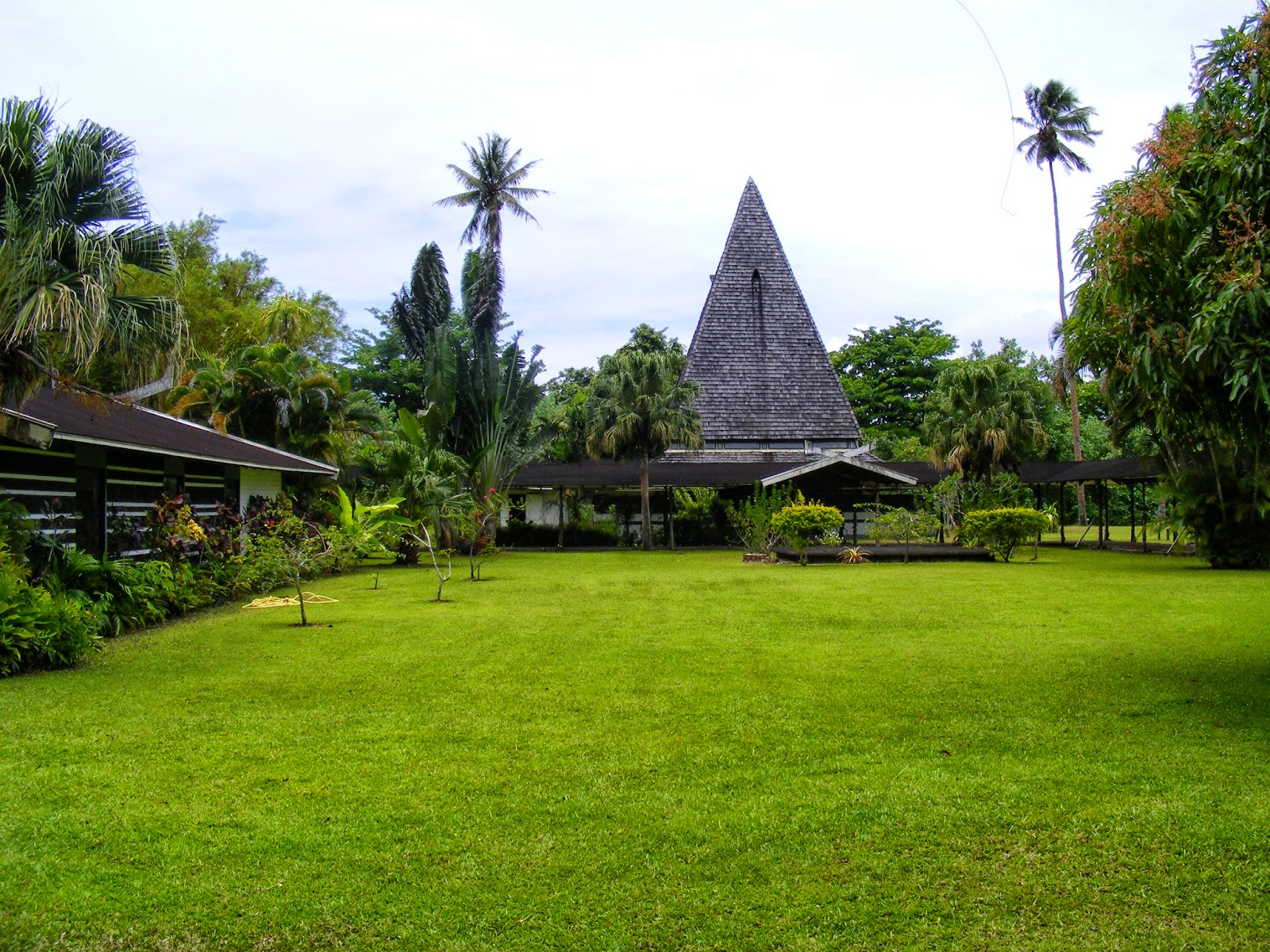 Once again, the entrance to this was not included in the price of our half day round the island trip which cost us 4500 Polynesian French Francs (CFP) or about £40 each. The entrance to this museum was apparently 600CFP or about £6 roughly but we only paid 300CFP so not sure if there has been a total price reduction for all or if we got a reduction because we were on the tour. The museum is open from 9am to 5pm daily and it is totally self guided by reading the information boards around in the three different buildings.
As you turn off the main road down the drive to the museum there is a really nice sign but unfortunately like so much of Tahiti the sign was covered in graffiti and so we didn’t bother taking a photo for our album. The drive way was really lovely with huge giant bamboos alongside a stream and lovely tropical plants on the other side so all looked good. 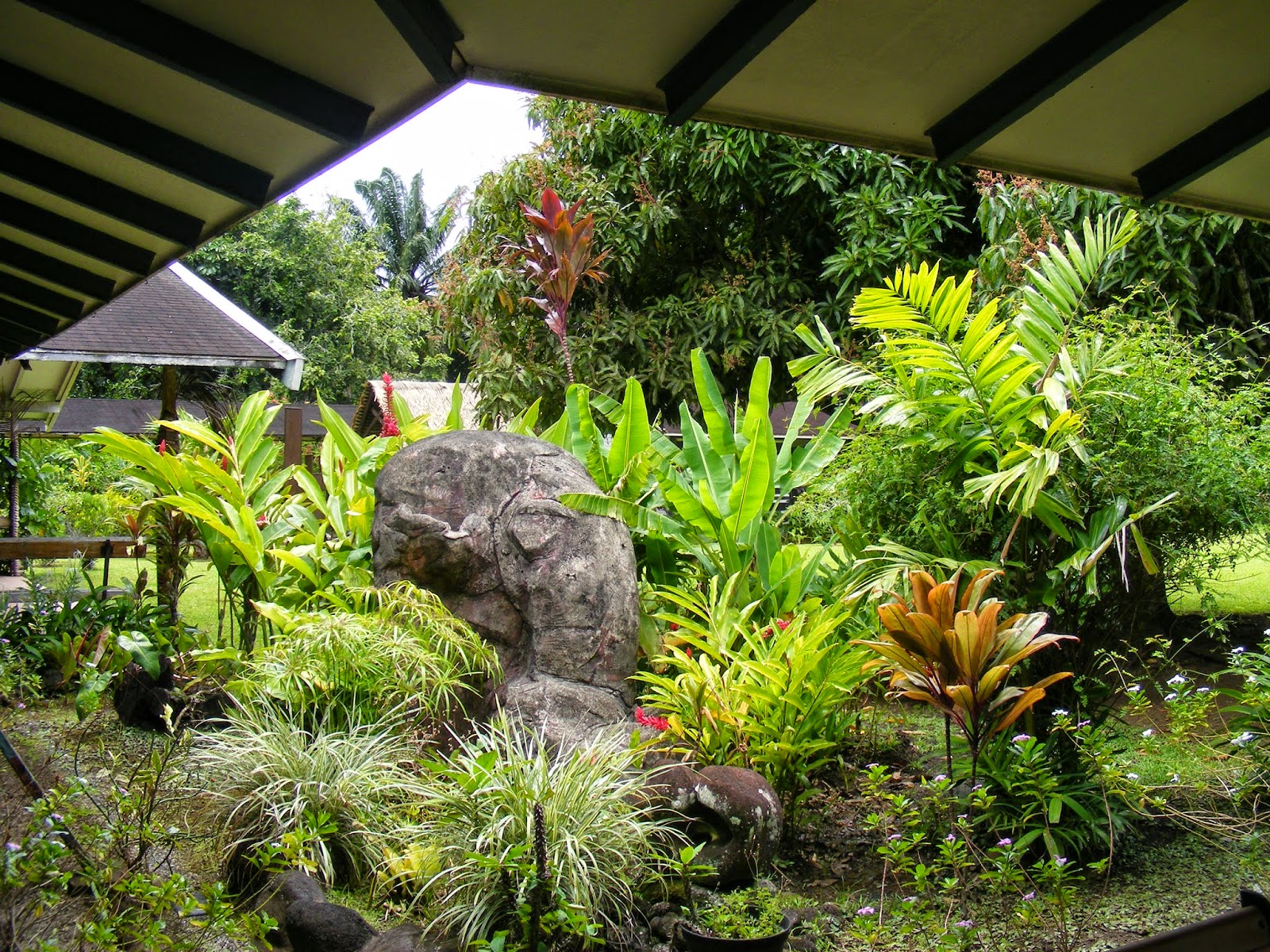 As we arrived we paid the lady behind a simple counter and then our guide pointed us in the direction of the main exhibition rooms and the toilets and off we went.

The museum was done in chronological order and so the first room was about his early life and his marriage to a Scandinavian woman called Mette, their life in France and the fact that he had two children and a fairly normal job and life. He travelled quite a bit as a younger man as he was a sailor, a huge map showed all the countries he had visited and he certainly saw a great deal of the world. He had been to the West Indies, round the Middle East as well as to the Pacific. 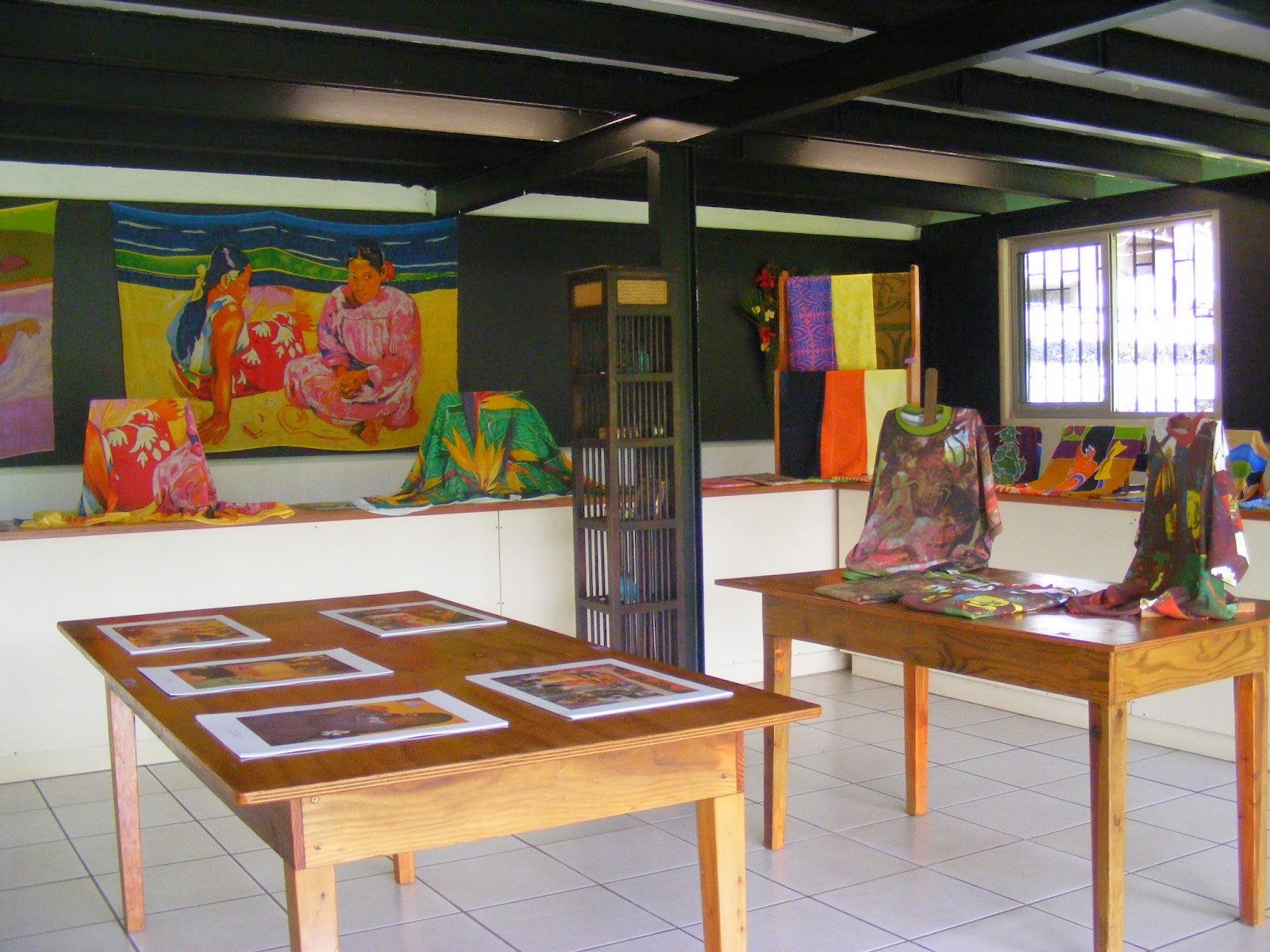 At about the age of 40 he decided to take up his art more seriously. He seemed to be quite friendly with several artists of the time and apparently bought quite a lot of art. He lived in Brittany then moved to the South of France to share a house with van Gogh which ended up with the argument when van Gogh cut off part of his ear! 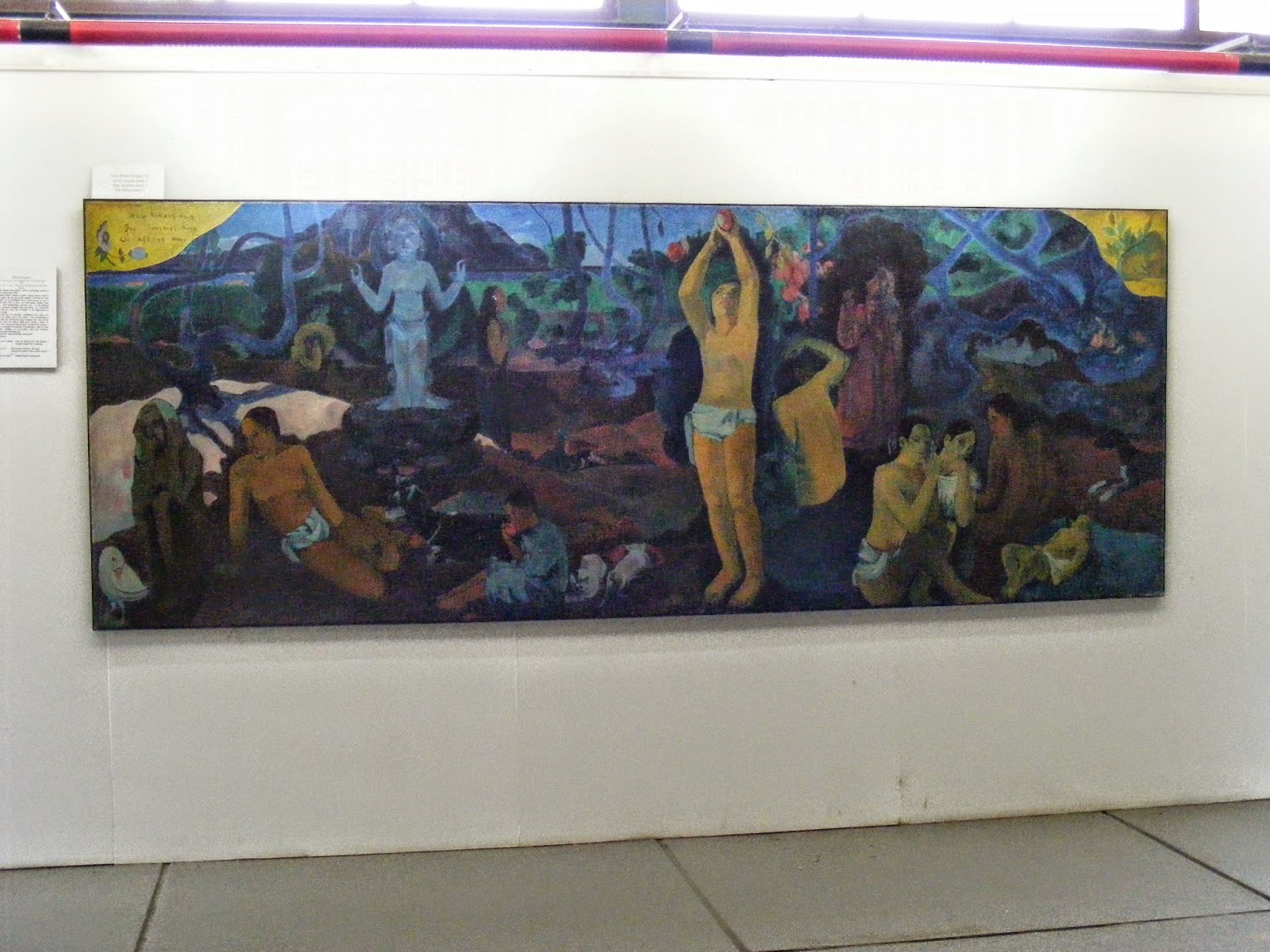 The relationship with his wife seems to have broken down as she took the children back to Denmark. As he died of syphilis and leprosy in the end, you do wonder where he picked up the former, was it as a young sailor or in his later years in the pacific after he abandoned his wife? 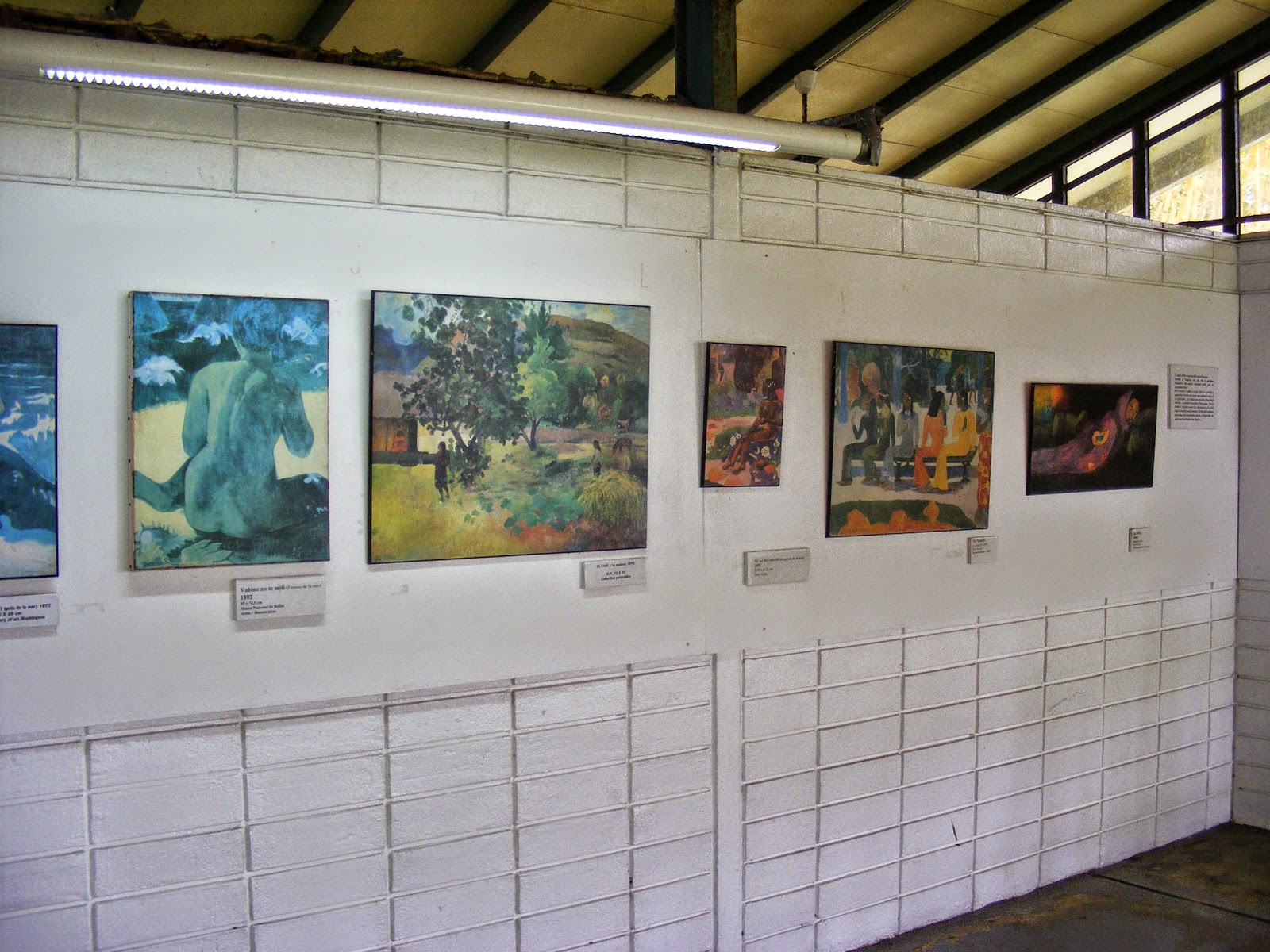 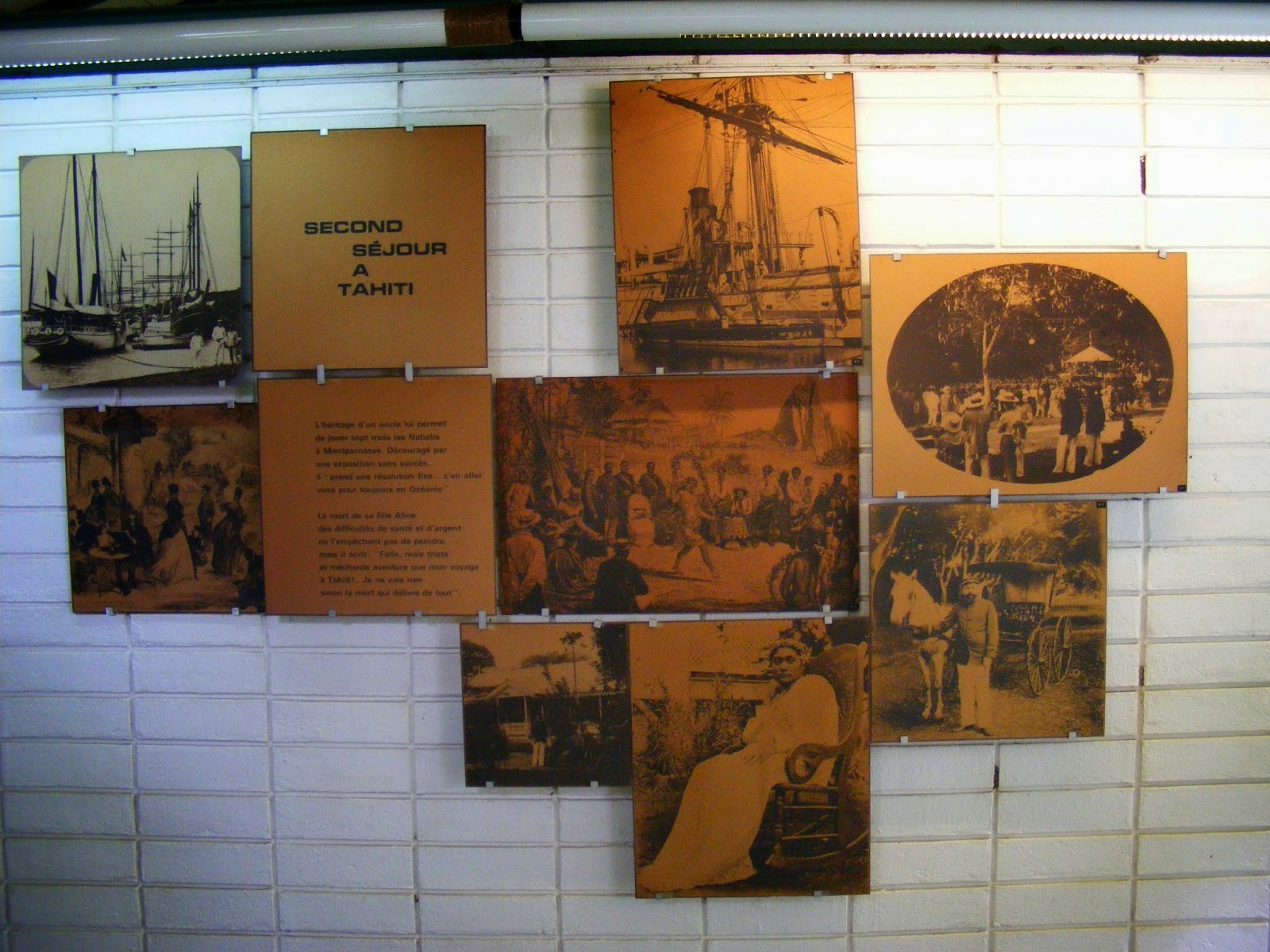 He commented at the time that Tahiti was not the ‘savage’ and ‘primitive’ place he was hoping to capture in his paintings, it was more like France. Maybe even then, the Tahitians were losing their cultural identity as they certainly seem to have today.

On his return to Tahiti he lived on one of the other Polynesian islands. He built a large home and took a very young local wife with whom he had a child. He continued to live a rather bohemian existence, painting many of his works with his young wife as the central figure. He partied, drank and smoked and caused great offense to the local catholic priest who couldn’t abide him. Many of his paintings of this time had this poor young ‘wife’ of his as the central person and despite his ill health he continued painting.

The museum in Tahiti delicately states he died of a heart attack but he was pretty revolting towards the end of his life as the syphilis and leprosy were both eating away at him. You do wonder what happened to the poor girl who was married off to him at the young age of about 12 -14. No doubt she had a rather short life and had to put up with a ghastly old sick man, it really doesn’t bare thinking about. 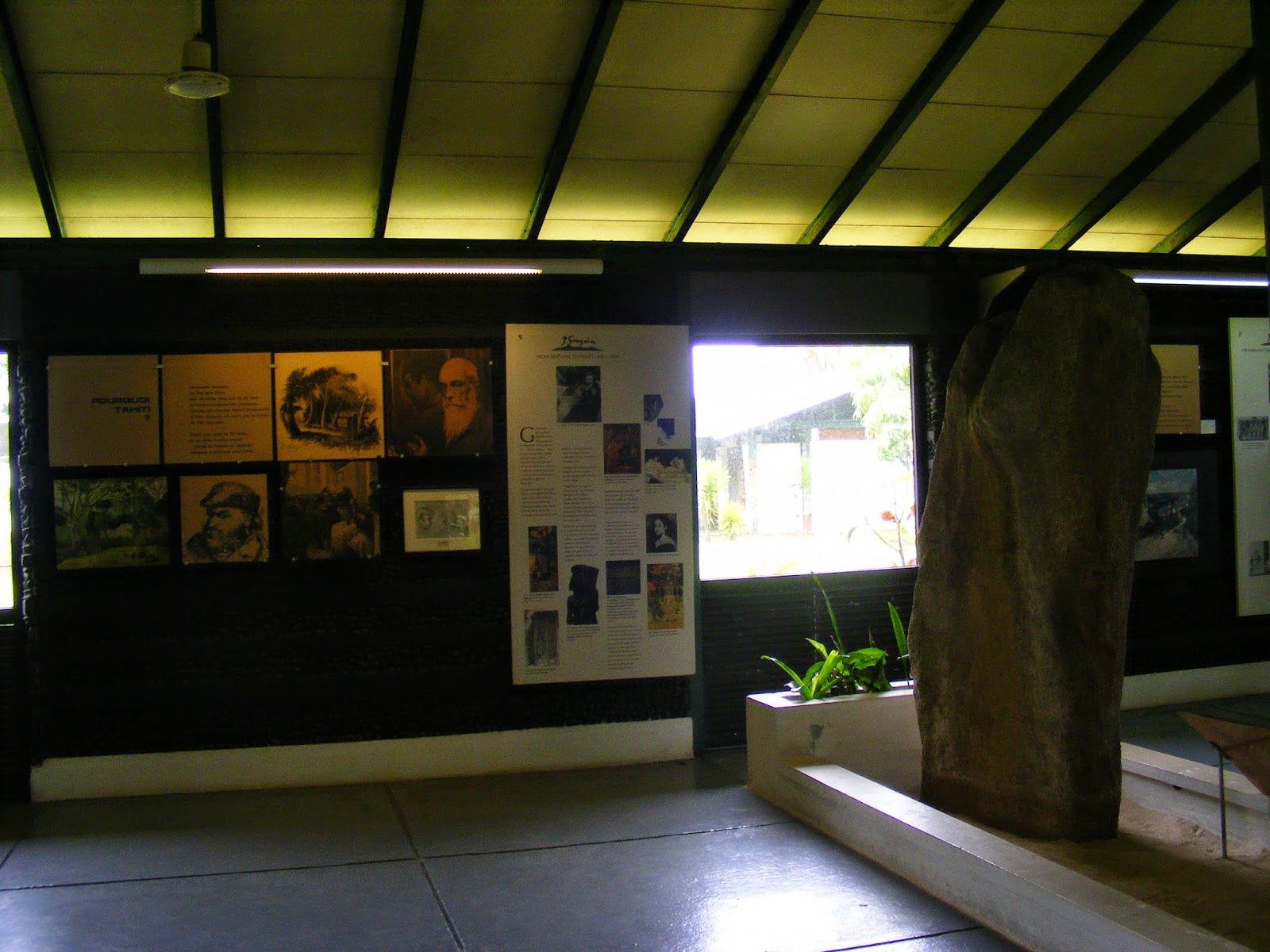 One of the rooms in the museum had small versions of all his paintings and grouped them as to where in the world they were today. There were many in the various galleries in the USA, obviously in the French galleries as well as others in Europe but there are no originals in any of the British galleries. There were a huge number held in private collections, almost as many as were in the various galleries which surprised me. 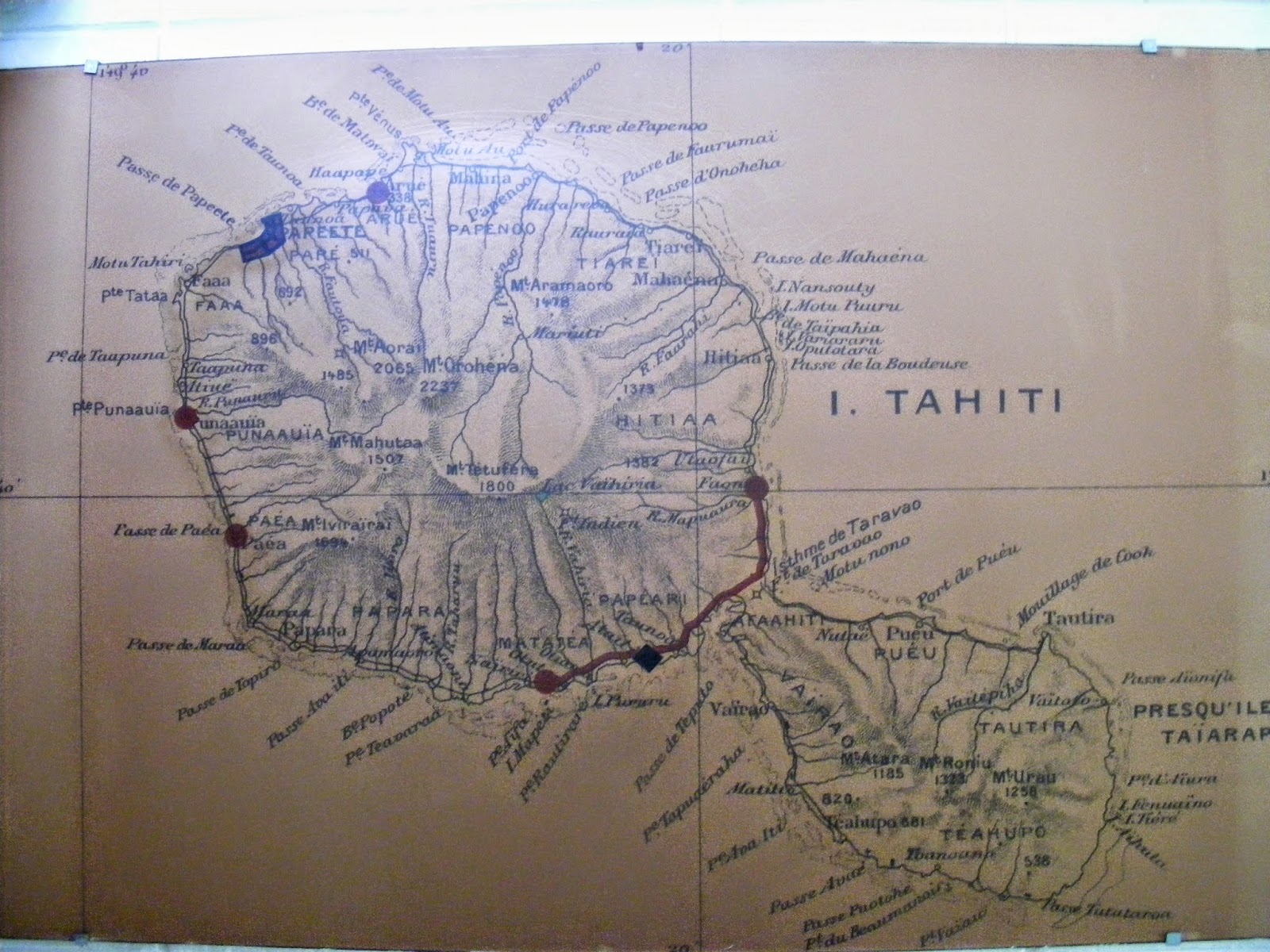 Throughout the museum there were rather faded copies of his work at the time with explanations about where he was and how he was developing artistically at that time. It was quite a large museum spread over three different buildings and all the information was in both French and English  In  the last building there were paintings where he had been inspired by Japanese artists and interestingly there was some information in Japanese here but no anywhere else. 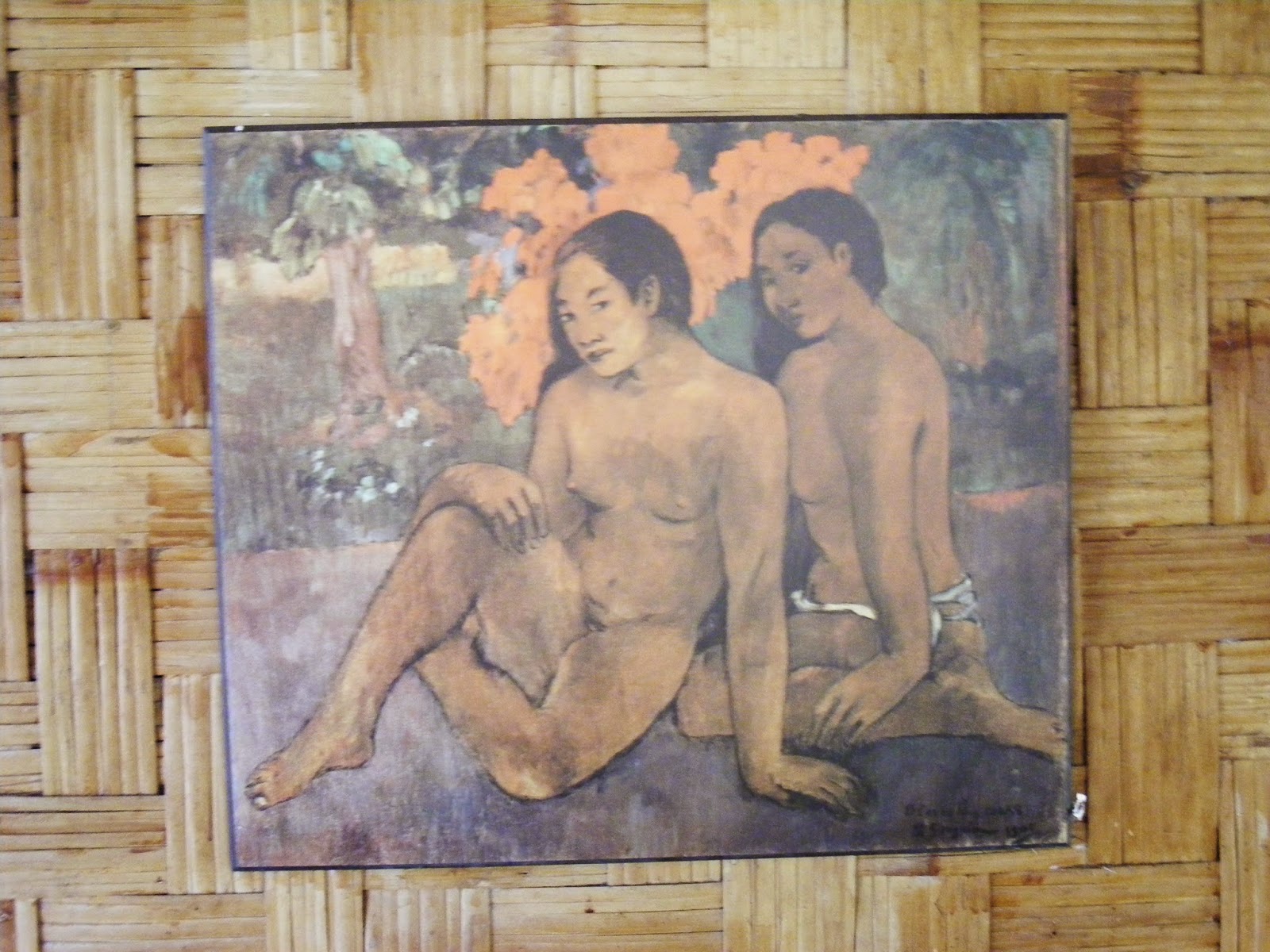 There museum was all fairly open and relied upon through breezes to keep it cool. The floors were cement and everywhere was very simple but it all also looked a bit dated, the pictures were quite faded and as part of the appeal of Gauguin’s work is the colour I found that disappointing. 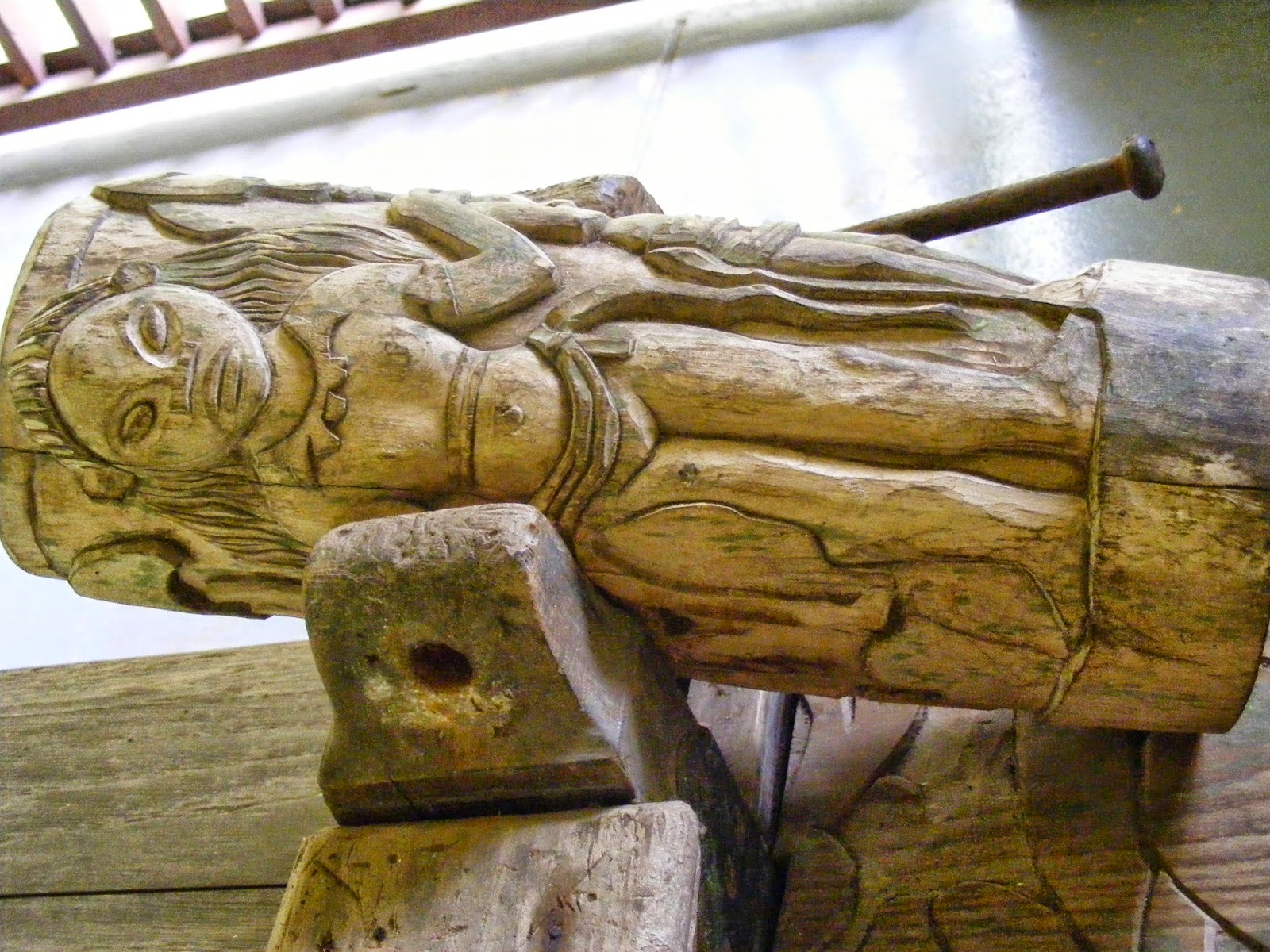 I found it hard to decide what I thought. The information was all very interesting but not inspiring at all in its presentation. One thing that we did find quite stunning was a huge piece of French rock that for some reason he had shipped to Tahiti to remind him of France. You do have to ask why? Very strange, surely a painting would have done the same thing and been more attractive and far easier and cheaper to transport. They say there is a fine line between genius and madness and to me that was total madness! It wasn’t even a particularly beautiful rock, just a pale lump of rock with no interest to it at all. 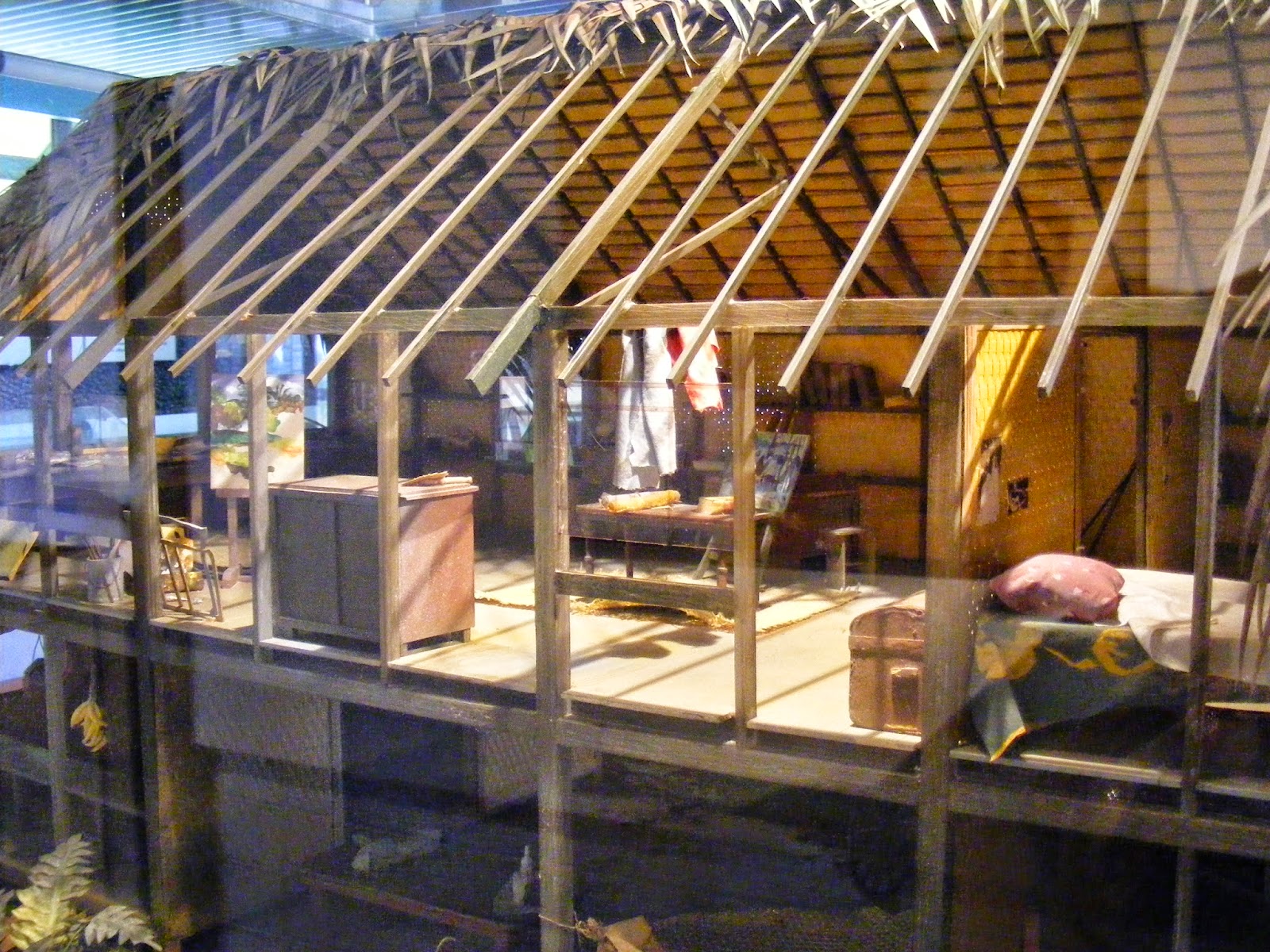 The museum is set is lovely tropical gardens and within the gardens are a number of ancient stone tikis which were quite interesting but would have been more so with a bit more information. There was a little information with the first one about how they were important religious symbols but not really any great detail. Aside from the gardens the property has a sea front and so you can also look out and enjoy the sea views. I have since discovered in my research that there is some history in that tikis should not be moved and the people involved in the removal of the tikis to this site have all come to some misfortune, a bit like Tutankhamen’s tomb! 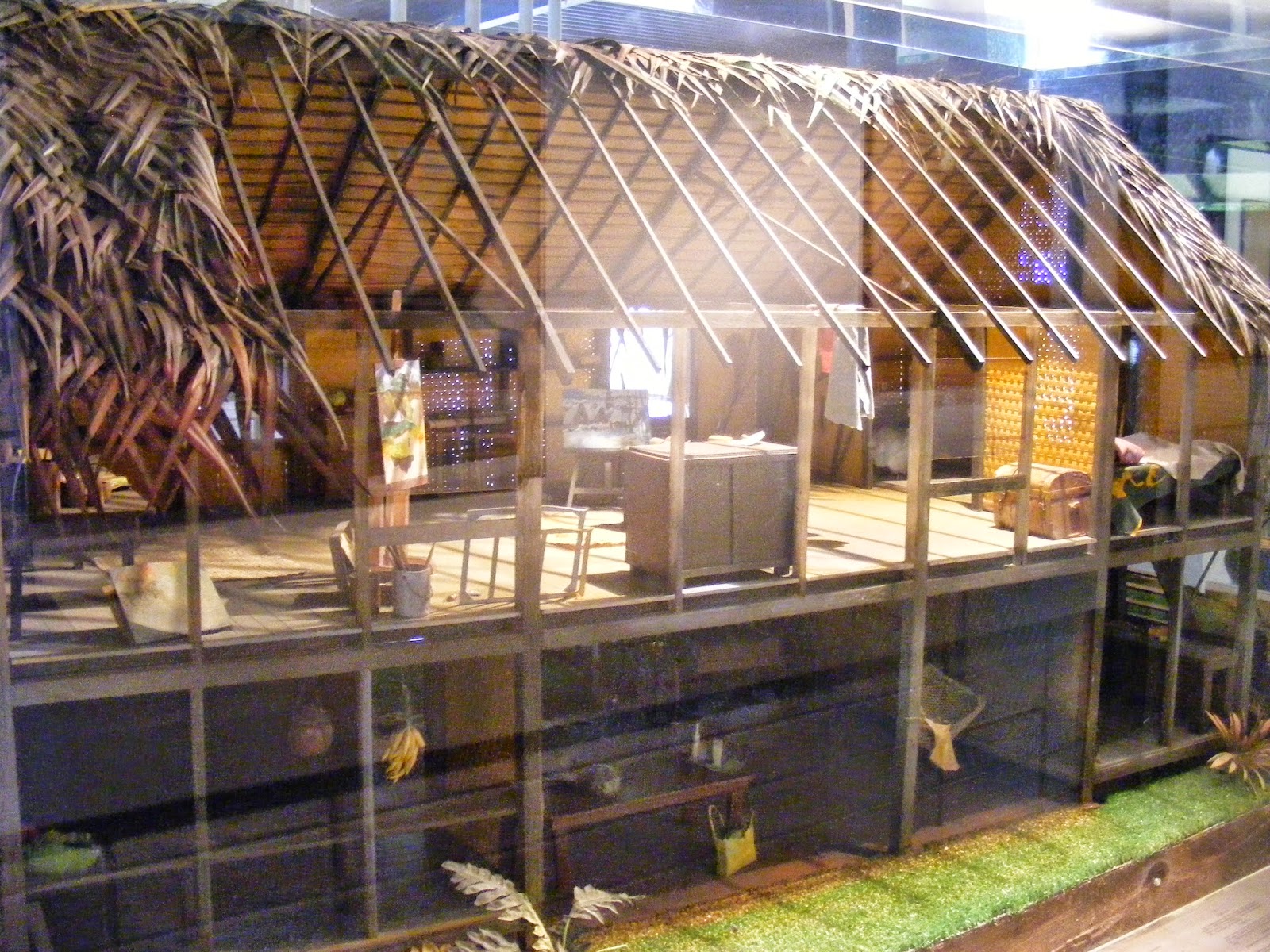 The souvenir shop had postcards at 100 CFP each (about £1) , fridge magnets, sarongs with Gauguinesque pictures for 2000CFP ( think 100 to the £1) and then some ornaments which were actually quite nice but they were stunningly pricey at about £230 each. We bought one postcard!! 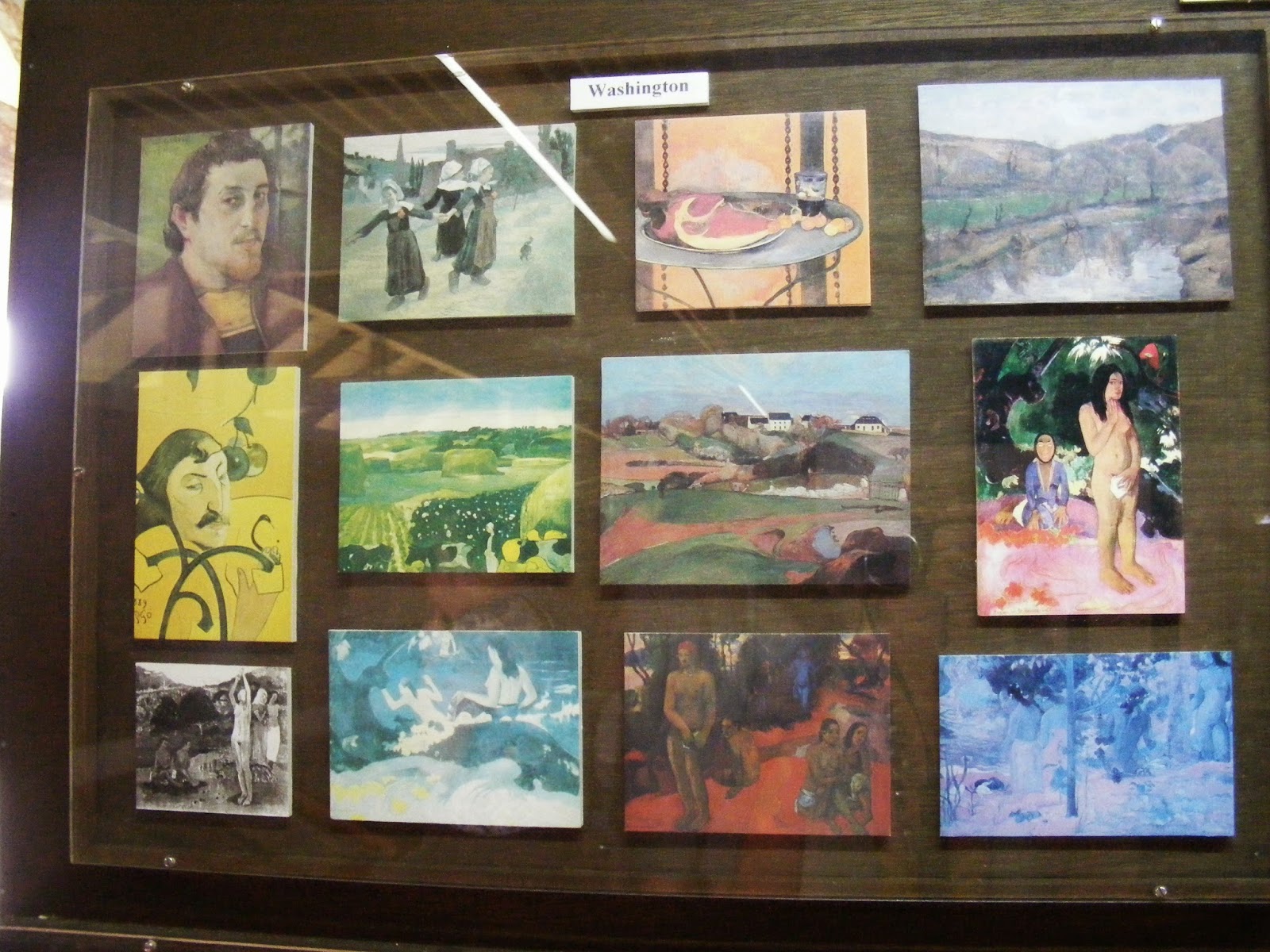 As I said I don’t really know what to think as the museum was set in lovely grounds and was quite informative but just not terribly inspiring. If you are in Tahiti then yes you should go and visit this and really this is the highlight in the list of things to see on Tahiti Nui but if you are a fan of Gauguin ‘s paintings then I think you will be a bit disappointed. I was not expecting any originals but I did think that the copies would be as good as posters and not faded and tired looking. 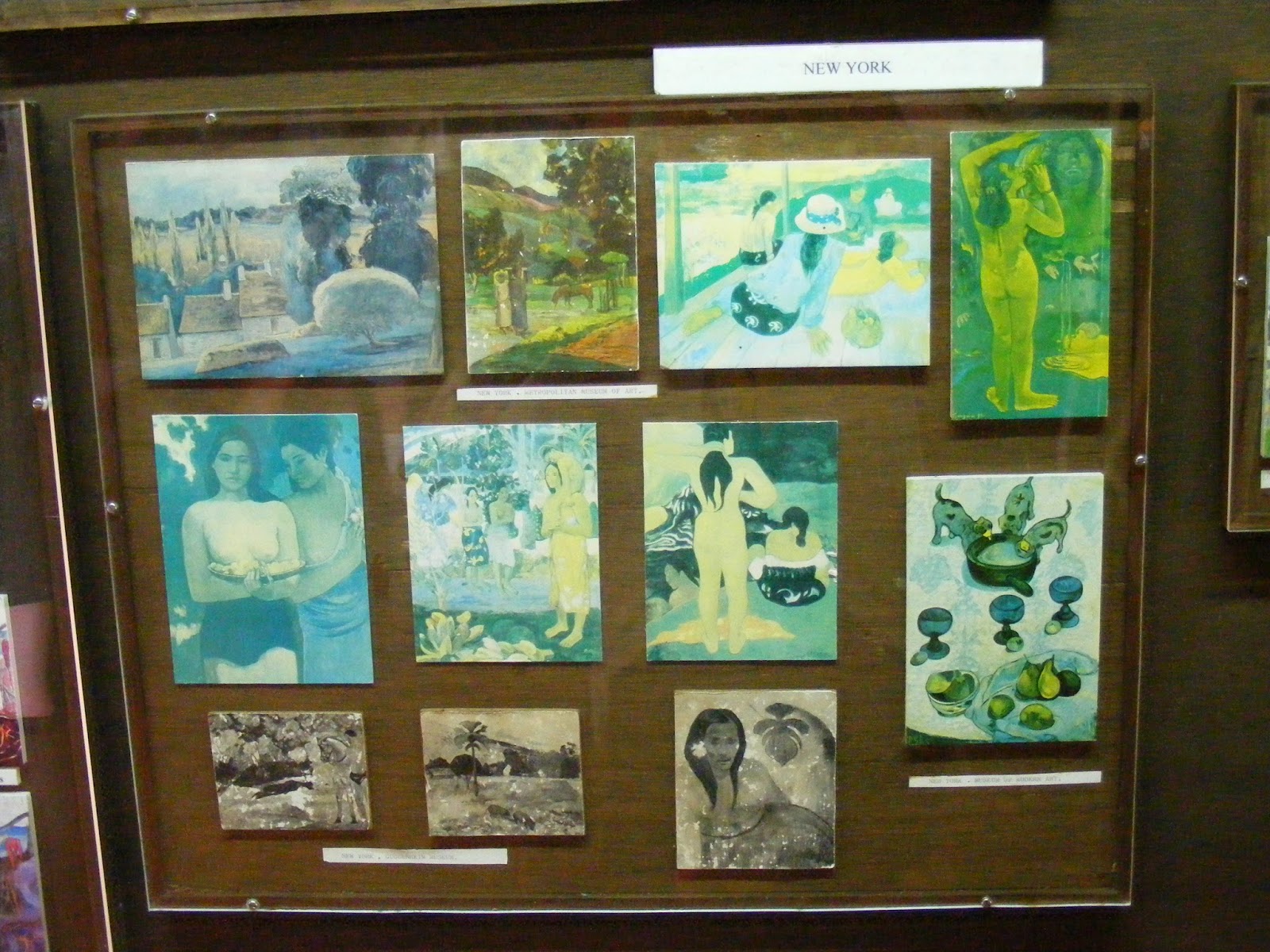 There is supposedly a restaurant but it certainly wasn’t obvious and there was no cafe either as far as we could see. In fact the entire museum was rather half hearted and had an air of ‘can’t be bothered’ about it. The gift shop as I said had items for extortionate prices and they were not even really items that you would want anyway. 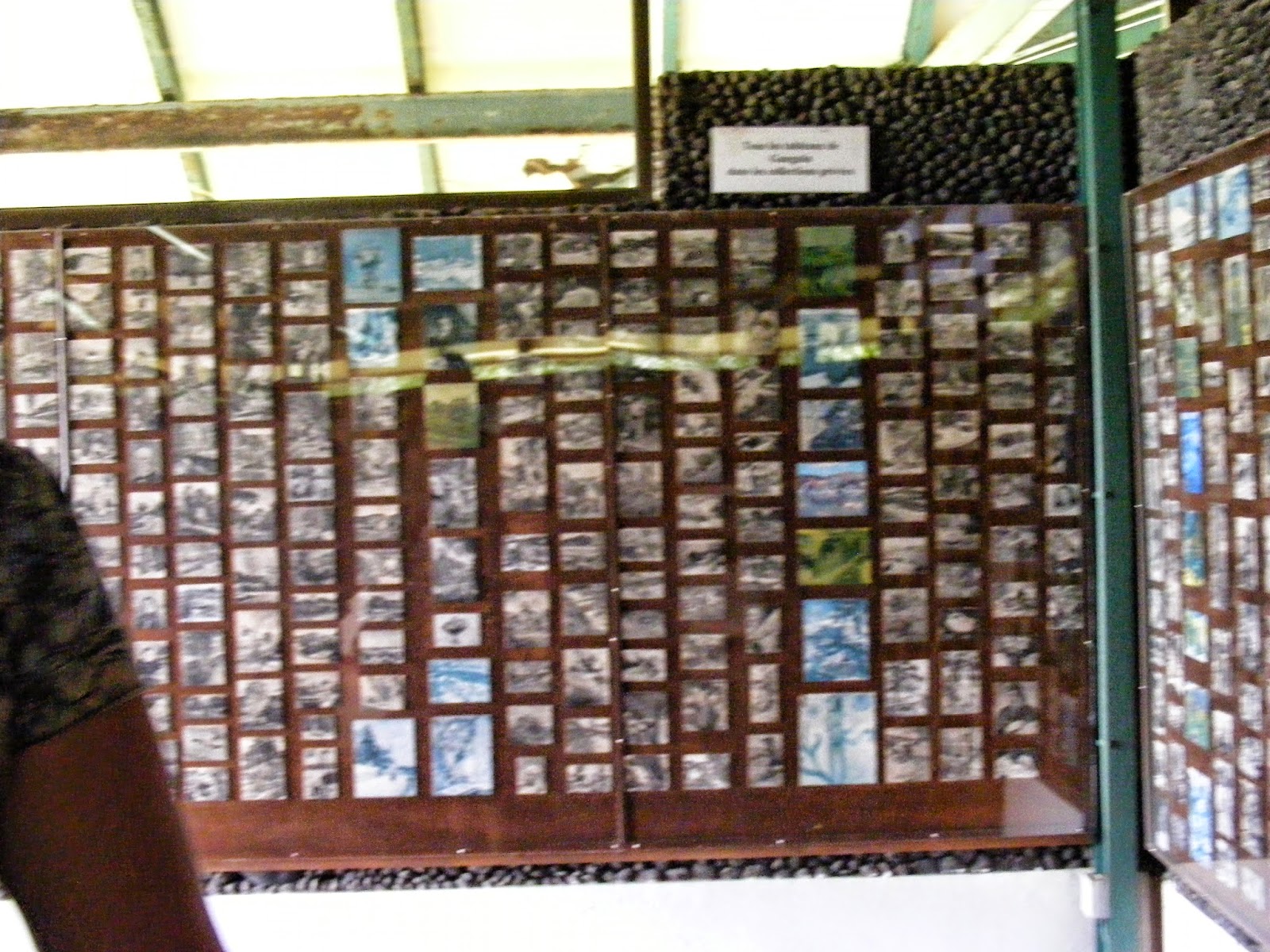 This museum sums up Tahiti generally for me; it is faded, past its best. The paintings of Gauguin’s bear no resemblance at all to the island we visited. There was nothing exotic or romantic or even traditional about the place and that was a big disappointment. I was not expecting things to be as Cook and others found them but I was expecting something a little more like Samoa and Fiji had been.
Posted by Unknown at 15:39